The latest reports show that the frequency and severity of earthquakes around Ulaanbaatar, where almost 50 percent of Mongolia’s population live, have increased

Governor of the capital city and Ulaanbaatar City Mayor, S.Amarsaikhan,

Deputy Chief of the NEMA, Mr B. Uuganbayar,

Warm greetings to you all on this first day of the Earthquake Preparedness and Response Drill in Ulaanbaatar!

I’d like to commend the Mongolian Government and NEMA for organising this important and large-scale drill with national and international partners and citizens of Ulaanbaatar to ensure we all are well-prepared if an earthquake strikes.

This is a very timely and needed initiative. A number of studies have shown that Mongolia’s capital city is potentially becoming more prone to earthquakes. The latest reports show that the frequency and severity of earthquakes around Ulaanbaatar, where almost 50 percent of Mongolia’s population live, have increased 5-10 fold in the past 14 years. Since 2005, 11 thousand tremors were recorded around Ulaanbaatar incl 26 earthquakes with a magnitude of 3.5 and higher. Seven of those were severe events, noticeable to residents. In last year alone, over 800 earthquakes of different magnitudes occurred around Ulaanbaatar. As you know, the 2011-2015 earthquake resistance study of 524 buildings in UB has found that 278 of them are not earthquake-resistant.

The Mongolian Government and NEMA have therefore been working hard to increase the preparedness not only of government agencies and but also to increase knowledge and awareness of citizens, including the most vulnerable members of society  such as the youngest, the elderly, persons with disabilities, pregnant mothers -- in the spirit of leaving no one behind.

The United Nations very much welcomes this exercise. It presents a unique opportunity for the UN and the Humanitarian Country Team, to test our preparedness for sudden onset disasters, like earthquakes. During the process, we will be looking to assess UN and partner emergency plans and systems, as well as our data collection capacities, response prioritization and resource mobilization mechanisms in addition to testing the most effective ways of coordinating with the government.

This drill also presents an opportunity to assess Mongolia’s regulations to facilitate the smooth delivery of humanitarian assistance to the country - should this be called for by Government.  As you know, the UN organisations operate under tax and customs exemptions. The same however does currently not apply to other international humanitarian actors and may pose an impediment for these humanitarian partners to deliver assistance speedily and effectively.

NEMA in preparing for this drill have asked us to participate as if this would be a real-life event. And our UN teams and HCT members welcome the call and the challenge. Because after all, our preparedness can be equated to lives saved.

As Mongolians say, disasters strike without declaring their arrival. And the best guarantee for the best response possible is preparedness. I’d like to also stress the importance of investing in preparedness, particularly, in infrastructure and mainstreaming disaster risk reduction into planning. The studies show that 1 USD invested in preparedness saves 7 USD in response.

I wish all of us a good and well-organized collaboration for a successful exercise and much learning. 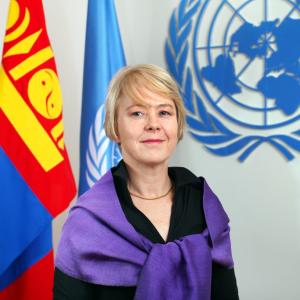