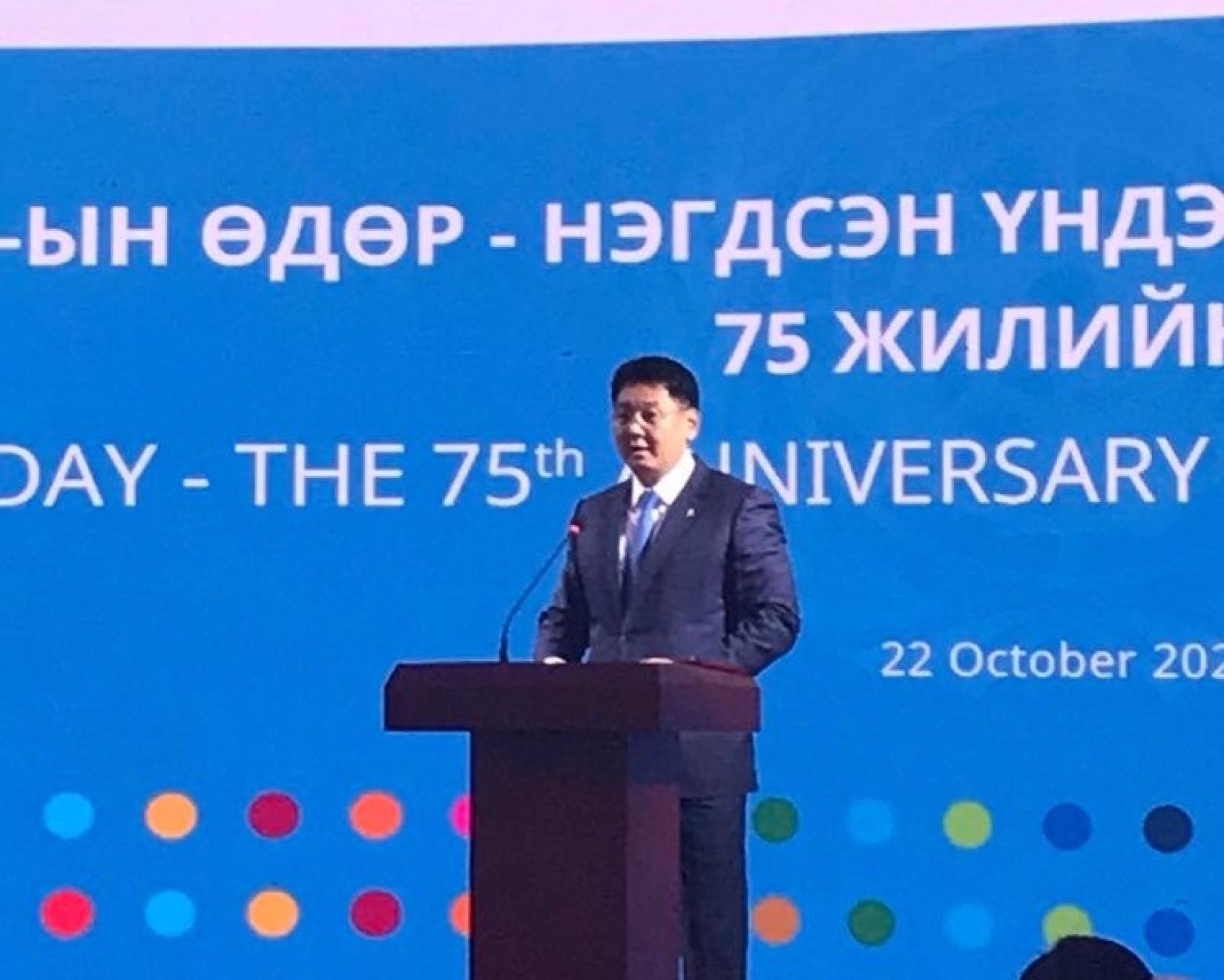 On 22 October, the UN Resident Coordinator Tapan Mishra welcomed H.E Ukhnaa Khurelsukh Prime Minister of Mongolia and dignitaries in Mongolia at an official ceremony held at the Ministry of Foreign Affairs to commemorate this special day.

On his congratulatory speech at the event, H.E U.Khurelsukh, Prime Minister of Mongolia said:

"Today 11 agencies are resident in Mongolia representing their respective United Nations organizations, funds and programs. They have become our important development partners. I would like to thank the UN Country Team once again for their support and effective cooperation on all aspects, including poverty, human rights, governance, democracy, children, women, youth, people with disabilities and the environment.”

At his opening remarks, Mr. Mishra congratulated the Government of Mongolia’s strong leadership and support to the UN.

“Mongolia is an active member of the UN at the global stages and contributes more UN peacekeepers per capita than any other country in the world.”

Mongolia was one of the first countries who committed and mainstreamed Sustainable Development Goals (SDGs) into its national policy by adopting Mongolia’s long-term Policy (SDV-2030) which was developed based on the SDGs in 2016. The Vision-2050 which the Parliament recently approved replacing SDV was even comprehensive and beyond 2030.

While congratulating the Government of Mongolia on its important strides on advancing the SDGs in Mongolia, Mr. Mishra further stressed that there is much more that can and should be done to make sure Mongolia will prosper, the vulnerable receive the care and support they need, and no Mongolian is left behind.

Thus, throughout 2020, the UN is seeking to hear the voices of people from all walks of life worldwide for a brighter future. Joining this global conversation, the UN Mongolia listened to the voices of all segments of society in Mongolia through 12 consultative dialogues involving 470 people. In addition, more than 1400 people have responded to an online survey.

Mongolian people’s voices were loud and clear. Mongolians are concerned about the impacts of climate change in the Mongolian nomadic animal husbandry. People in vulnerable segments of society strive for equal and accessible social services and security for livelihoods. It was evident that Mongolians are forward-looking for better and more inclusive economic recovery and growth that provides decent jobs and better livelihoods for all.

As the world faces the unprecedented pandemic, the UN Mongolia developed a Socio-Economic Response Plan for COVID-19, which is one of the three critical components of our multilateral response – to save lives, protect people, and rebuild better – in keeping with the guidance of the UN Secretary-General.

The UN Mongolia Country Team committed “To deliver as One UN” our best support to Mongolia. As such, the UN Mongolia endeavours for more efficient and coordinated efforts of all UN agencies in tackling the impacts of the current global pandemic and support Mongolia recovery better from the Covid-19.