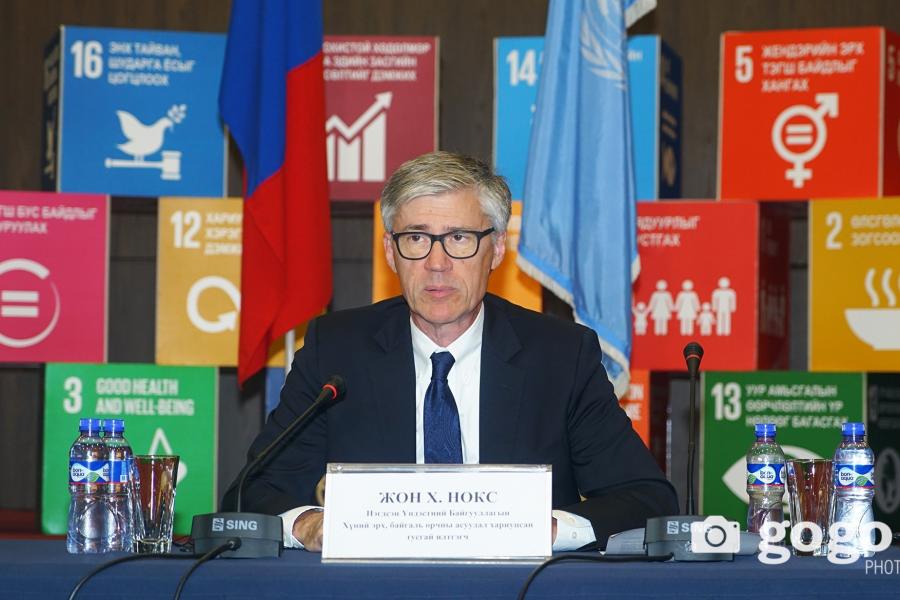 “Global warming is changing Mongolia’s climate more rapidly than that of many other countries,” warned Special Rapporteur on human rights and the environment, John H. Knox, saying the country’s world-famous nomadic herding culture was under threat from severe weather and the loss of land to mining and agriculture.

Mr. Knox praised the dedicated Mongolians working to protect the environment with exceptional commitment, and said the country already had a host of pertinent laws setting out strong environmental standards and safeguards.

But he called for urgent action to tackle air pollution, improve resources and properly assess a major new gold mining project which had the potential to cause major environmental damage. Existing laws should be fully deployed and an Environmental Ombudsman created to serve as a focal point for environmental information and complaints, he said.

Air pollution in the capital, Ulaanbaatar, did the “most obvious harm to human rights in Mongolia,” Mr. Knox noted in a statement marking the end of his mission.

“Most of this pollution is caused by burning coal in household stoves, although pollution from power plants and vehicles contributes to the problem,” he said.  “During the cold months in winter, Ulaanbaatar becomes one of the most polluted cities in the world.  A brown haze fills the sky and the air is infused with levels of particulates and other pollutants.”

Mining was also causing severe damage, he said, both by polluting rivers from which drinking water is drawn and by causing other environmental damage.

“Mining requires particular attention in Mongolia, because it is so important to the economy and because it can be so environmentally destructive,” Mr. Knox said.  “Mining standards should ensure that the mining is done safely, that it minimizes environmental harm, and that after the mining is completed, the site is restored as far as possible to its original status. Unavoidable harm should be offset and/or compensated.”

“When done correctly, this process can and should result in benefits not only for the country as a whole, but also for the local communities directly affected by the mining,” he added.

“Widespread illegal mining had to be tackled and environmental assessments carried out properly,” the Special Rapporteur said.

“I was told that impact assessments are often simply cut-and-pasted, so that an assessment of a mine in the Gobi, for example, addresses the impacts on forests found in northern Mongolia,” Mr. Knox observed, adding that local residents often learnt about projects only when the bulldozers moved in.

The new gold mining project, named Gold-2, would harm much of the remaining pasture land in the Zaamar district of Tov province, and cause far more environmental damage, but had been approved despite local opposition. “This is contrary to the relevant human rights obligations,” the Special Rapporteur noted. “To comply with those obligations, the Government should conduct a full-scale, detailed assessment of the proposal for Gold-2.”

Mr. Knox said the creation of the Environmental Ombudsman was his chief recommendation, but new laws on protecting human rights defenders and on public access to information were also needed.

He also urged a Government investigation into the death of conservation ranger Lkhagvasumberel (Sumbe) Tumursukh, whose death in 2015 was declared to be suicide even though he had suffered repeated attacks.  “This progression is all too typical of the untimely deaths of environmentalists around the world – threats, followed by violence, followed by murder,” Mr.  Knox observed.

During his mission, , from 19 to 27 September 2017, the Special Rapporteur met representatives of Government ministries, judges and Members of Parliament, international and regional organizations, members of civil society, and academics.

The Special Rapporteur will present a comprehensive report on the findings of his mission to the UN Human Rights Council in March 2018.

The UN Human Rights Council appointed Mr. John H. Knox in 2012 to serve as Independent Expert, and reappointed him in 2015 as Special Rapporteur on human rights obligations related to the enjoyment of a safe, clean, healthy and sustainable environment. The Council requested him, a professor of international law at Wake Forest University in the United States, to clarify the application of human rights norms to environmental protection, and to identify best practices in the use of human rights obligations in environmental policy-making.