Our team in Mongolia 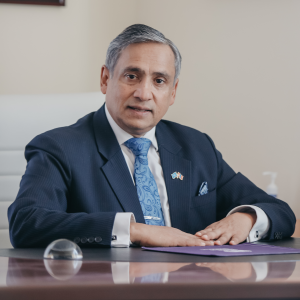 UN
Resident Coordinator
tapan.mishra@un.org
Mr Tapan Mishra has taken over his role as the United Nations Resident Coordinator (UN RC) for Mongolia in September 2019. As UN RC, the highest-ranking representative of the United Nations Development System in Mongolia, he has been designated by the UN Secretary-General to lead the UN Country Team in coordinating operational activities for development in the country. Before this post in Mongolia, Mr Mishra served as UN RC in DPR Korea from 2015 to 2019.

Mr Tapan Mishra first joined the UN system in 2003 as the UNDP Learning Advisor and Deputy Chief of the Learning Resources Centre (LRC) in the Office of Human Resources, Bureau of Management where he moved up to become the Director and Chief of LRC from 2007 to 2013.
Read more 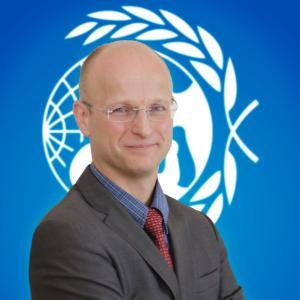 UNICEF
Representative
aheikens@unicef.org
Alex Heikens joined UNICEF Mongolia in 2017. Before that, he was UNICEF’s senior adviser on climate change, energy and environmental sustainability in Headquarters. Prior to UNICEF, Alex served as a Regional Policy Adviser for UNDP Asia-Pacific Regional Office, providing support to UNDP Country Offices and Governments on addressing climate change (2010 – 2013). Between 2007 and 2010, he was with UNDP Indonesia and developed its climate change portfolio and assisted the Government of Indonesia with formulating key-policy documents and programmes such as UNREDD. From 2003 till 2007 he worked for the Food and Agriculture Organization in Bangladesh and the regional office in Thailand providing advice on contaminated ground water resources. Alex holds a PhD in environmental sciences and a MSc in biology from the University of Utrecht.
Read more 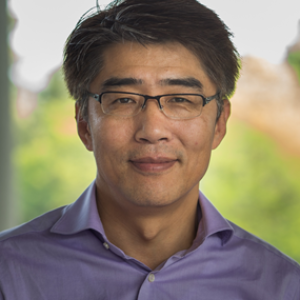 ILO
Director of ILO Country Office for China and Mongolia
chlee@ilo.org
Dr. Changhee LEE is appointed as Director of ILO Country Office for China and Mongolia, effective from July 1, 2021. He joined ILO HQ in Geneva in 1996 where he participated in a number of major global research programme on industrial relations. Subsequently he worked as an industrial relations specialist of the ILO’s East Asian team in Bangkok covering South East and North East Asia (2000-2006) and in Beijing covering China, Mongolia and Viet Nam (2006-2012) During his service in East Asia, he provided policy advices to tripartite industrial relations actors in East Asia on a wide range of industrial relations policy issues. In 2012, he returned to ILO HQ in Geneva and worked as a senior policy analyst of the Policy Integration Department, and a senior labour relations specialist at the Inclusive Labour Markets, Labour Relations and Working Conditions Branch (INWORK). He was also a member of the Task Force for reform of ILO’s field operation, appointed by the Director-General. He worked as a Director of ILO Country Office for Viet Nam since September 2015 until his recent appointment of Country Director of ILO Country Office for China and Mongolia on July 1, 2021. Chang-Hee Lee is a citizen of the Republic of Korea. He has a Ph.D of sociology from Seoul National University (1996), and he worked as a research fellow (1993-95) and a visiting professor (2010) at the Institute of Social Sciences, Tokyo University, Japan. He has numerous articles published on industrial relations and human resource management on international academic journals. He co-edited a book “Industrial Relations in Emerging Economies – Quest for Inclusive Development” (Elgar, 2018).
Read more 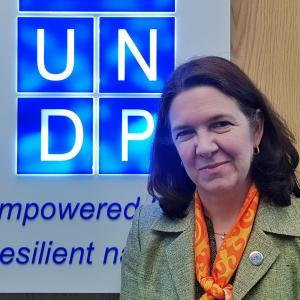 UNDP
Representative
elaine.conkievich@undp.org
Ms. Elaine Conkievich joined UNDP as Resident Representative in Mongolia on 9 November 2019. Previously, she was with UN Women since 2014 as the Representative and Head of the Multi-Country Office Kazakhstan (Central Asia) promoting gender equality and women’s empowerment. Ms. Conkievich has additionally worked with the OSCE, other parts of the UN and international NGOs in several countries of Eastern Europe, Balkans, Caucasus, and Central Asia. She is a senior international development professional with 26 years of experience in the fields of governance, human rights, rule of law, gender mainstreaming, democratic institution building, conflict resolution, and preventive diplomacy. Ms. Conkievich has a Master’s degree, with a Graduate Award for Achievement, in International Studies, with a focus on Soviet Studies and peace and conflict resolution, from The American University, School of International Service, Washington DC. She graduated Summa Cum Laude with Bachelor degrees in German and International Relations and a Certificate in Russian and Eastern European Affairs from the Robert D. Clark Honors College at University of Oregon, during which she studied two years at Universität Freiburg, Germany. Ms. Conkievich is fluent in English, German, and Russian.
Read more 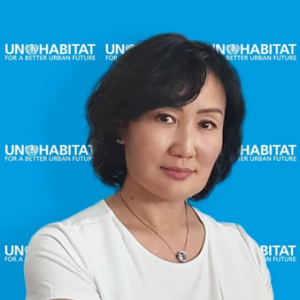 UN-Habitat
Project Manager
enkhtsetseg.shagdarsuren@unhabitat.org
Since April 2013, Ms. Enkhtsetseg Shagdarsuren has been working as a Country Programme Manager and officer in charge of UN-Habitat Mongolia. She joined UN-Habitat in 2006 as a project manager for the UN-Habitat project on Pro-poor Ger Area Upgrading Strategy and Investment Programme of Ulaanbaatar City. Before she joined the UN-Habitat, she worked for the Land Administration and Urban Development Departments and Urban Development, Research and Design Institute of Ulaanbaatar City and Land Affairs, Geodesy and Cartography Agency under the Ministry of Construction and Urban Development as a GIS Expert, Head of Land Information Center, and Head of Divisions.
Read more 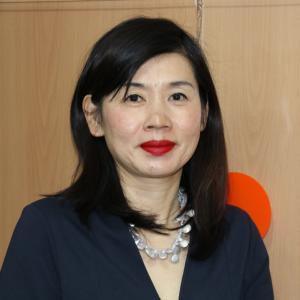 UNFPA
Other
kishikawa@unfpa.org
Prior to her assignment in Mongolia, she served in a number of UNFPA Country Offices and Sub-Offices with large and complex operations, including Lao PDR, Yemen, Indonesia, Afghanistan and Myanmar. She also served in UNFPA Arab States Regional Office (ASRO) in Cairo and Gender, Human Rights and Culture Branch of Technical Division of UNFPA HQ in New York as Gender Specialist. She has also worked with the United Nations Environment Programme (UNEP) and the Japanese Organization for International Cooperation in Family Planning (JOICFP) in Japan. Kaori is a national from Japan and holds a Bachelor's degrees in Sociology, with specialization on social welfare policy on aging population from Ritsumeikan University, Japan, a Diploma in Development Studies from the University of East Anglia, UK and a Master's degree in Women and Development from Institute of Social Studies in the Netherlands and a Master of Business Administration at Warwick Business School in the UK. She is married with one daughter.
Read more 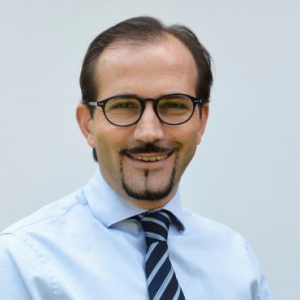 IOM
Other
gcrocetti@iom.int
Mr. Giuseppe Crocetti was appointed as the IOM Chief of Mission in the People’s Republic of China and the non-resident IOM Chief of Mission for Mongolia based in Beijing, China in 2018. Mr. Giuseppe Crocetti graduated in Law and received his Masters in European Studies and International Relations from La Sapienza University in Rome in 2002. Admitted to the Bar soon after his university studies, Mr. Crocetti practiced law before the Italian courts before joining in 2004 the International Criminal Tribunal for the Genocide in Rwanda based in Arusha, Tanzania. Specializing in international human rights law with a focus on migrants rights, Mr. Crocetti began his career with the International Organization for Migration in 2005 serving first with the IOM Mission in Sri Lanka until 2007. From 2007 to 2009 Mr. Crocetti was posted in Cambodia leading IOM’s programming in the area of technical cooperation and capacity building on migration management. In 2009 Mr. Crocetti was appointed as the IOM Chief of Mission in Papua New Guinea where he served for four years assisting, amongst many other achievements, the government of Papua New Guinea in becoming a Member State of IOM.
Read more 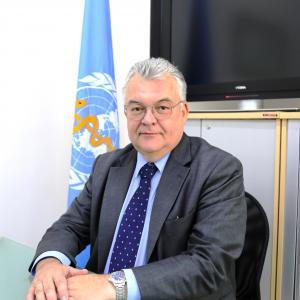 WHO
Representative
diorditsas@who.int
Dr Sergey Diorditsa, PhD, MPH, has assumed his duties of WHO Representative in Mongolia on 2 August 2017. Prior to this assignment, Dr Diorditsa served as a Coordinator of the Extended Programme on Immunization Division at WHO Office for the Western Pacific for six years. From 2003 to 2011, Dr Diorditsa worked as a Medical Officer in WHO Representative Office for Bangladesh. His service in WHO started in 2001 as a consultant on Extended Programme on Immunization, after his career at the Institute of Viral Preparations (IVP), as well as the Institute of Tropical Medicine in Moscow, Russia. Dr Diorditsa graduated from the 1st Medical Academy of Moscow as a Doctor of Medicine. He holds an MPH in Medical Parasitology and Tropical Medicine Epidemiology, Control of Tropical Diseases from the Institute of Parasitology and Tropical Medicine of Moscow. He earned his PhD in Virology from the IVP, Moscow, Russia.
Read more 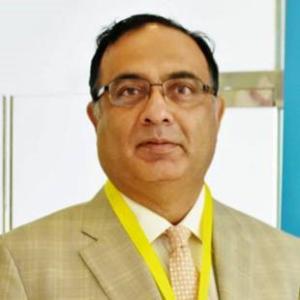 UNESCO
Representative
s.khan@unesco.org
Professor Shahbaz Khan (Australian) is the Director of the UNESCO Office in Beijing and UNESCO Representative to the Democratic People’s Republic of Korea, Japan, Mongolia, People’s Republic of China, and the Republic of Korea. Prof Khan joined UNESCO in 2008 at its Headquarters as Chief of the Water and Sustainable Development Section. Then he served as the Director of the Regional Bureau for Sciences in Asia and the Pacific in Jakarta, Indonesia, and UNESCO Representative to Indonesia, Brunei Darussalam, Malaysia, the Philippines and Timor-Leste (2015-2021). 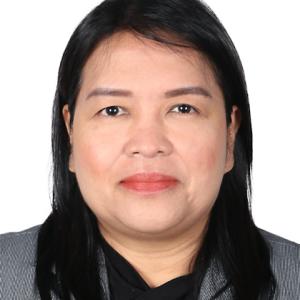 UNIDO
Representative
T.LIM@unido.org
Ms. Lim started her career in the UN in 2010 as Industrial Development Officer at UNIDO’s Regional Office in India, where she got actively involved in UN Country Team activities; managed technical cooperation projects; and, supervised UNIDO’s portfolio development on the thematic areas of environment and energy, notably in Bangladesh, Maldives, Nepal and Sri Lanka.
From 2013-2017, she was assigned to the Department of Energy at UNIDO’s headquarters in Vienna, Austria, where she focused on the management of projects implemented in India, Cambodia, China, Malaysia, and the Philippines. There she spearheaded the development and implementation of UNIDO’s technical cooperation program on “Sustainable Cities: Hubs of Innovation, Low Carbon Industrialization and Climate Action”. She also managed several projects on renewable energy for off-grid electrification and low-carbon transport, mostly supported by the Global Environment Facility (GEF).
From 2017-2020, Ms. Lim served as UNIDO Country Representative in the Philippines, where she led the development and operationalization of the first UNIDO Country Programme in the country.
Prior to joining UNIDO, Ms. Lim was a Career Service Executive and held various positions in the Philippine government, notably as Head of the Environmental Safety Group of the Philippine Economic Zone Authority (PEZA) and as Bank Officer (Crisis Management) at the country’s Central Bank.
Ms. Lim holds a Master’s Degree in Environmental Management from the Ateneo De Manila University and the University of San Francisco and pursued graduate studies on renewable energy at the Technical University of Vienna. She earned her Bachelor’s Degree in Chemistry from the University of the Philippines.
Read more 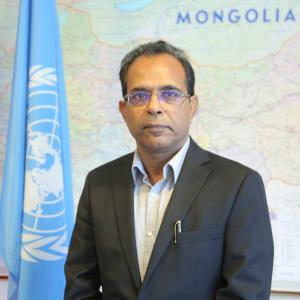 FAO
Representative
vinod.ahuja@fao.org
Prior to moving to Mongolia, he was based at the FAO Regional Office for Asia and the Pacific, Bangkok as Livestock Policy Officer. During 1998-2009, he taught at the Indian Institute of Management, Ahmedabad, India and worked for the World Bank in Washington DC during 1994-97. He has written extensively on a broad range of topics including barriers to collective action, poverty and income distribution, commercialization of agricultural services and food security and nutrition. He has supported a large number of field projects in Asia and promoted partnerships towards establishing new service delivery models based on genuine farmer needs. He has been an ardent advocate of the potential of dairy sector towards promotion of household food security, nutrition, and empowerment of women in poor countries. In January 2016, he was recognized by the Dairy Farming Promotion Organization of Thailand for his contribution to Asian dairy sector. In recognition of his contribution, DPO awarded him a plaque which was given by HRH Princess Mahachakri Sirindhorn in the opening ceremony of the national dairy festival of Thailand. In March 2017, he was presented the Asian Dairy Personality award by VIV Asia.
Read more